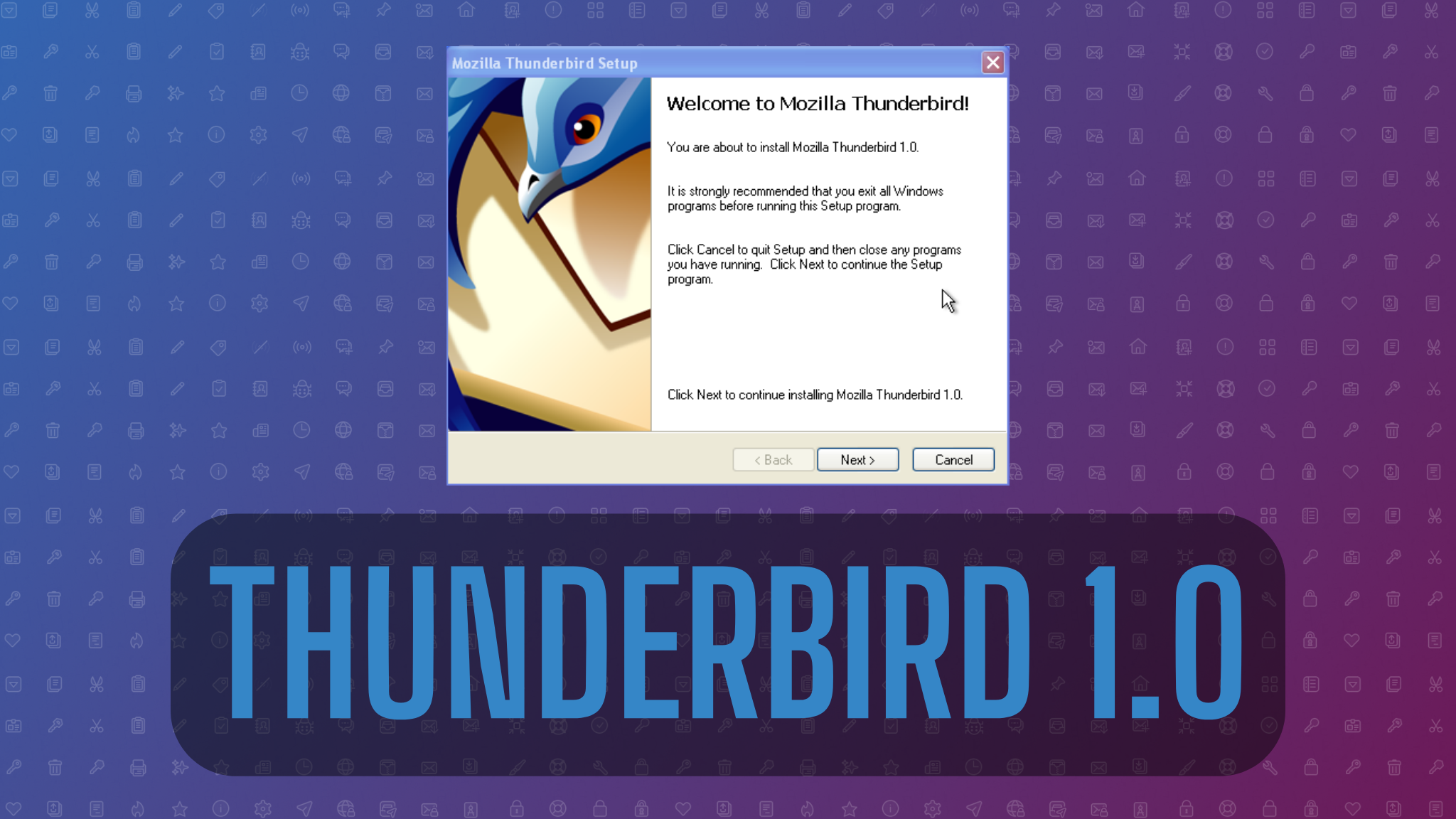 Let’s step back into the Thunderbird Time Machine, and transport ourselves back to November 2004. If you were a tech-obsessed geek like me, maybe you were upgrading Windows 98 to Windows XP. Or playing Valve’s legendary shooter Half-Life 2. Maybe you were eagerly installing a pair of newly released open-source software applications called Firefox 1.0 and Thunderbird 1.0…

As we work toward a new era of Thunderbird, we’re also revisiting its roots. Because the entirety of Thunderbird’s releases and corresponding release notes have been preserved, I’ve started a self-guided tour of Thunderbird’s history. Read the first post in this series here:

Before we get into the features of Thunderbird 1.0, I have to call out the endearing credits reel that could be viewed from the “About Thunderbird” menu. You could really feel that spark of creativity and fun from the developers:

Thunderbird 1.0 launched in the prime of Windows XP, and it had a companion for the journey: Firefox 1.0! Though both of these applications had previous versions (with different logos and different names), their official 1.0 releases were milestones. Especially because they were open-source and represented quality alternatives to existing “walled-garden” options.

(Thunderbird was, and always has been, completely free to download and use. But the internet was far less ubiquitous than it is now, so we offered to mail users within the United States a CD-ROM for $5.95.)

Visually, it prided itself on having a pretty consistent look across Windows, Mac OS X, and Linux distributions like CentOS 3.3 or Red Hat. And the iconography was updated to be more colorful and playful, in a time when skeuomorphic design reigned supreme.

Thunderbird 1.0 launched with a really diverse set of features. It offered add-ons (just like its brother Firefox) to extend functionality. But it also delivered some cutting-edge stuff like:

Feeling Adventurous? Try It For Yourself!

If you have a PowerPC Mac, a 32-bit Linux distribution, or any real or virtualized version of Windows after Windows 98, you can take your own trip down memory lane. All of Thunderbird’s releases are archived here.

Thank you for acknowledging that old versions of your software still exist. Never change this stance.

IF I COULD TURN BACK TIME

IF I COULD FIND A WAY…
(But you can turn back time with Thunderbird, sort of — at least, if you have a virtual machine)

Am using them both on my Mx Linux, loving it