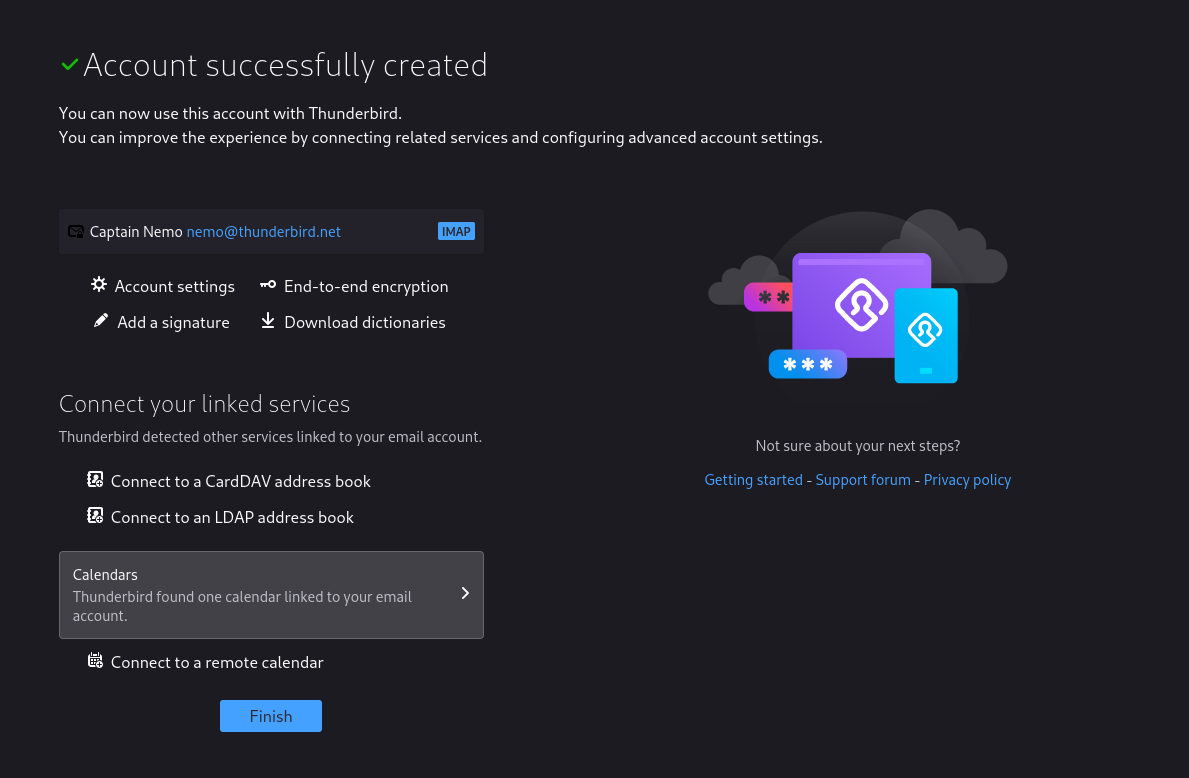 The newest stable release of Thunderbird, version 91, is available for download on our website now. Existing Thunderbird users will be updated to the newest version in the coming weeks.

Thunderbird 91 is our biggest release in years with a ton of new features, bug fixes and polish across the app. This past year had its challenges for the Thunderbird team, our community and our users. But in the midst of a global pandemic, the important role that email plays in our lives became even more obvious. Our team was blown away by the support we received in terms of donations and open source contributions and we extend a big thanks to everyone who helped out Thunderbird in the lead up to this release.

There are a ton of changes in the new Thunderbird, you can see them all in the release notes. In this post we’ll focus on the most notable and visible ones.

Thunderbird has gotten faster with multi-process support. The new multi-process Thunderbird takes better advantage of the processor in your computer by splitting up the application into multiple smaller processes instead of running as one large one. That’s a lot of geekspeak to say that Thunderbird 91 will feel like it got a speed boost.

One of the most noticeable changes for Thunderbird 91 is the new account setup wizard. The new wizard not only features a better look, but does auto-discovery of calendars and address books and allows most users to set them up with just a click. After setting up an account, the wizard also points users at additional (optional) things to do – such as adding a signature or setting up end-to-end encryption. 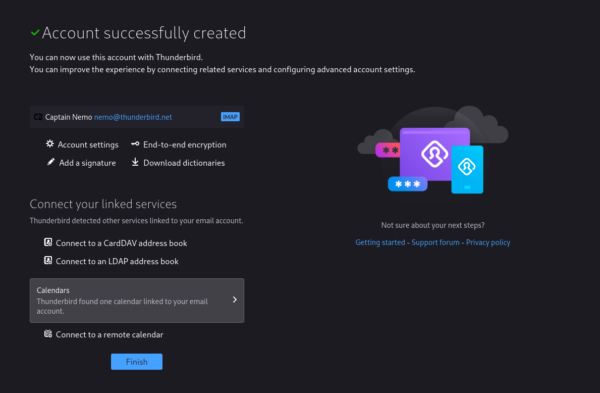 The attachments pane has been moved to the bottom of the compose window for better visibility of filenames as well as being able to see many at once. We’ve also added an overlay that appears when you drag-and-drop a file into the compose window asking how you would like to handle the file in that email (such as putting a picture in-line in your message or simply attaching it to the email). 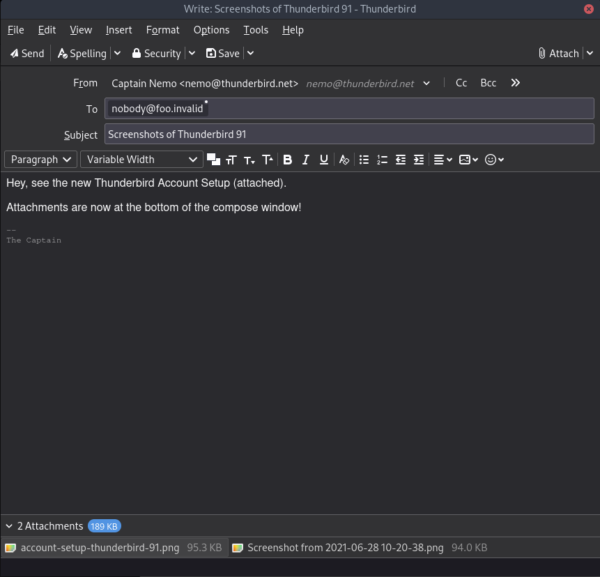 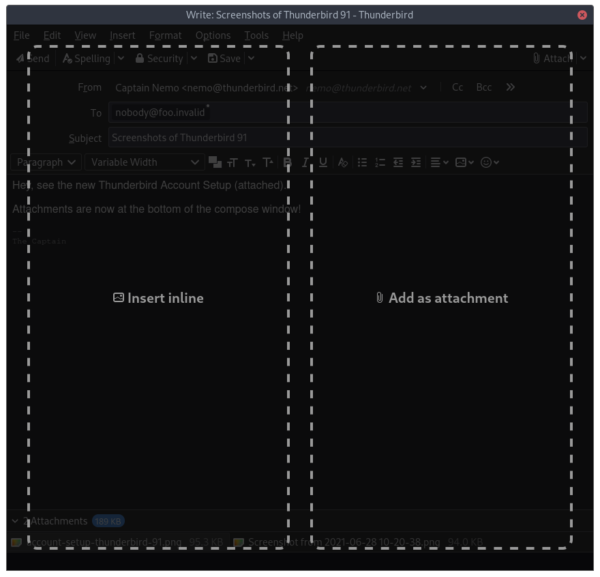 Thunderbird now has a built-in PDF viewer, which means you can read and even do some editing on PDFs sent to you as attachments. You can do all this without ever leaving Thunderbird, allowing you to return to your inbox without missing a beat. 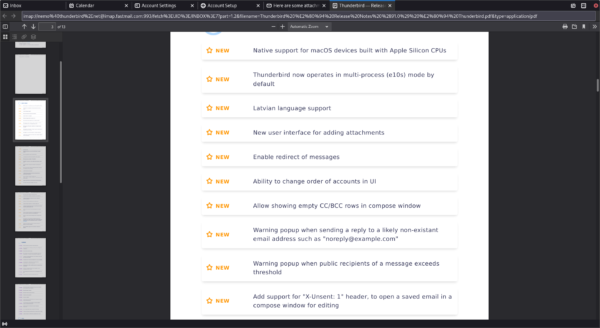 The PDF Viewer in Thunderbird 91

Depending on how you use Thunderbird and whether you are using it on a large desktop monitor or a small laptop touchscreen, you may want the icons and text of the interface to be larger and more spread out or very compact. In Thunderbird 91 under the View -> Density in the menu, you can select the UI density for the entire application. Three options are available: compact – which puts everything closer together, normal – the experience you are accustomed to in Thunderbird, and touch – that makes icons bigger and separates elements.

Play around with this new level of control and find what works best for you! 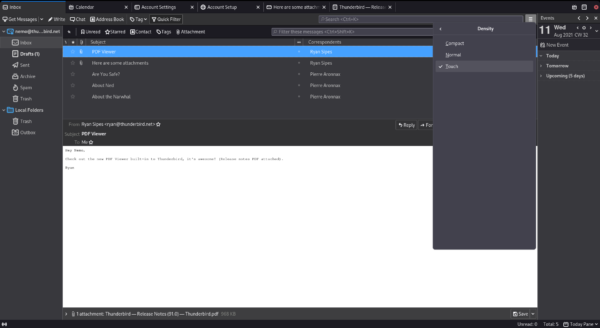 Managing multiple calendars has been made easier with the calendar sidebar improvements in this release. There is a quick enable button for disabled calendars, as well as a show/hide icon for easily toggling what calendars are visible. There is also a lock indicator for read-only calendars. Additionally, although not a sidebar improvement, there are now better color accents to highlight the current day in the calendar. 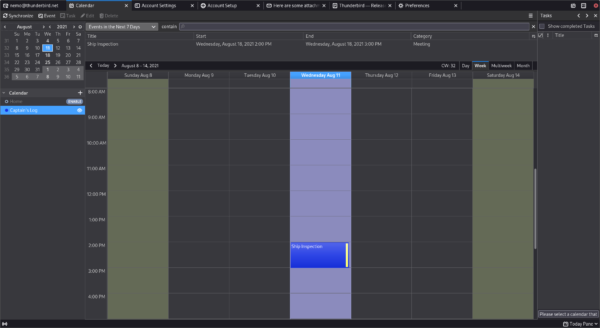 Thunderbird’s Dark Theme got even better in this release. In the past some windows and dialogues looked a bit out of place if you had Thunderbird’s dark theme selected. Now almost every dialogue and window in Thunderbird is fully styled to respect the user’s color scheme preferences. 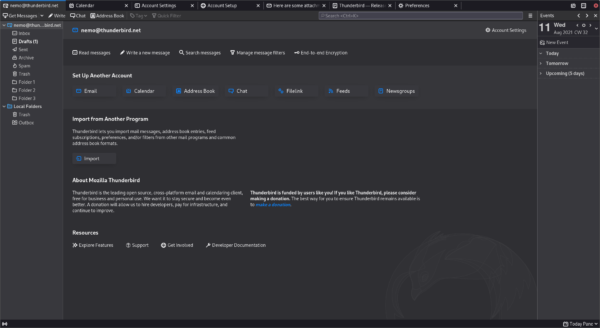 You really have to scroll through the release notes as there are a lot of little changes that make Thunderbird 91 feel really polished. Some other notable mentions are:

The new Thunderbird is a release that the team and community are proud of. Much of what was improved in this newest version was built upon the foundation we’ve been laying for the last three years. The next release will feature a new address book, further end-to-end encrypted email improvements, better Import/Export tools, a ton of calendar improvements and lots of amazing stuff that we’re not ready to talk about yet.

If you love Thunderbird and you want to see your favorite Email client get even better, we are supported by donations from our users and volunteer contributions from our community. Please consider helping us out with your expertise or with a donation if you appreciate the work that we are doing.

Congratulations, you are amazing! Finally carddav support! Hope see native system tray support for Linux, as it is provided to Windows. 🙂 Thank you a lot!!!

We definitely have to figure out how to do this in a way that works really great across the different desktops. Which desktop environment are you using?

Thanks Ryan! I use KDE Plasma.

I know AppIndicator technology can be used to implement system tray support to KDE Plasma and others DEs, while Gnome users can install a third party extension to support that too.

All the best to you and Thunderbird!

Feature request: One button to delete all the attachments from several selected messages.

Feature request #2: after saving attachments, Thunderbird should have the possibility to open the folder where the files were saved (like Firefox).

A great release.. Congratulations to the team and everybody involved.

Thanks Rahman, this one was a big one, we are glad you enjoy it!

Thanks, everybody, for all your hard work on this release. 🙂

Thanks Kevin, we appreciate the kind words!

Can we have an update of the availability for the conversion from version 78 to 91 ?
Thank you
Great Product, Use your product on Linux, Mac and Windows

Couldn’t wait for the automatic update, so used the installer.
The attachment handling has a great interface! Finally drag & drop is possible 🙂
I also like the ‘unread count’ on the taskbar icon in Windows.

Thanks for the great work! I can imagine a lot of work was done under the hood.
I made a donation in the recent past, glad to see what’s done with it.

Thank you for your kind words and your donation, that’s what keeps us going!

I find the red ‘unread count’ on the taskbar icon extremely annoying and distracting, and I can’t find an option in Preferences to remove it. Could this option be included in future updates? Other than that, I like the new version.

I’m agreement. that notification of unread email is distracting and needs to be an option only. I always have 99+ emails to read.

Awesome ! I’m really pleased to finally see this new great update and i look forward to trying it !
Thanks to everyone involved for giving thunderbird the attention it deserves

Regarding CardDav support, does this mean that Google Labels (groups) can now be synced in real time? The inability to sync google contact labels was the only reason I moved away from Thunderbird.

If I wish to have the attachment pane back to the top right corner, is it possible with v91?

Many thanks in advance.

Great news.
How about correct copying of Excel columns and rows into email preserving table borders?

is possible to set no to open PDF in PDF Viewer but in Adobe Reader?

Yesterday I wasn’t able to get version 91 to run. But I was also having a problem with my ISP. So I got that squared away and then tried to run Thunderbird again. I had installed v 68 last. This time it began to run and then gave me an error message (for the 1st time!) that my version was too old. So I installed v 91 on top of my current version and it all works again!

Still got to figure out how to get it in dark mode though.

Thanks for such a great email program. Definitely gonna donate to you!

Hi,
How do I print a weekly calendar? The only option is to print monthly but I want to print weekly like I could before.

Hey Courtney, I have an answer for you!

When you get open the print window while in the calendar tab, select “Weekly Planner” in the Layout drop-down menu.

When will the portable version be released?

I love Thunderbird, and I’m glad to see it’s alive and well. I look forward to trying out Thunderbird 91 in Kubuntu whenever it becomes available.