We’re happy to report that Thunderbird usage continues to expand.

Mozilla measures program usage by Active Daily Installations (ADI), which is the number of pings that Mozilla servers receive as installations do their daily plugin block-list update. This is not the same as the number of active users, since some users don’t access their program each day, and some installations are behind firewalls. An estimate of active monthly users is typically done by multiplying the ADI by a factor of 3.

To plot changes in Thunderbird usage over time, I’ve picked the peak ADI for each month for the last few years. Here’s the result: 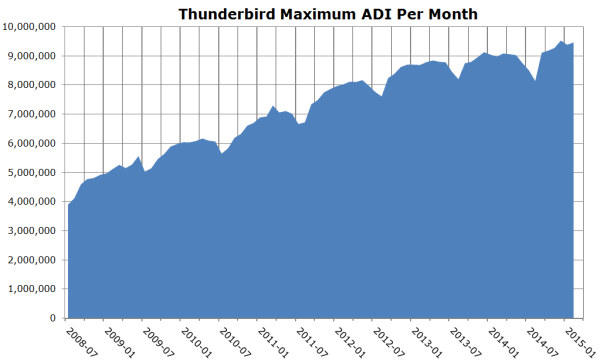 The Thunderbird team is now working hard preparing our next major release, which will be Thunderbird 38 in May 2015. We’ll be blogging more about that release in the next few weeks, including reporting on the many new features that we have added.

Kent James has been active in Mozilla Thunderbird since 2007, working mostly on backend code affecting message folders and filters. He is currently serving as the Chair of the Thunderbird Council. Kent is the principal of MesQuilla LLC which makes the ExQuilla Thunderbird add-on, providing support for email and contact sync using Microsoft Exchange Web Services.