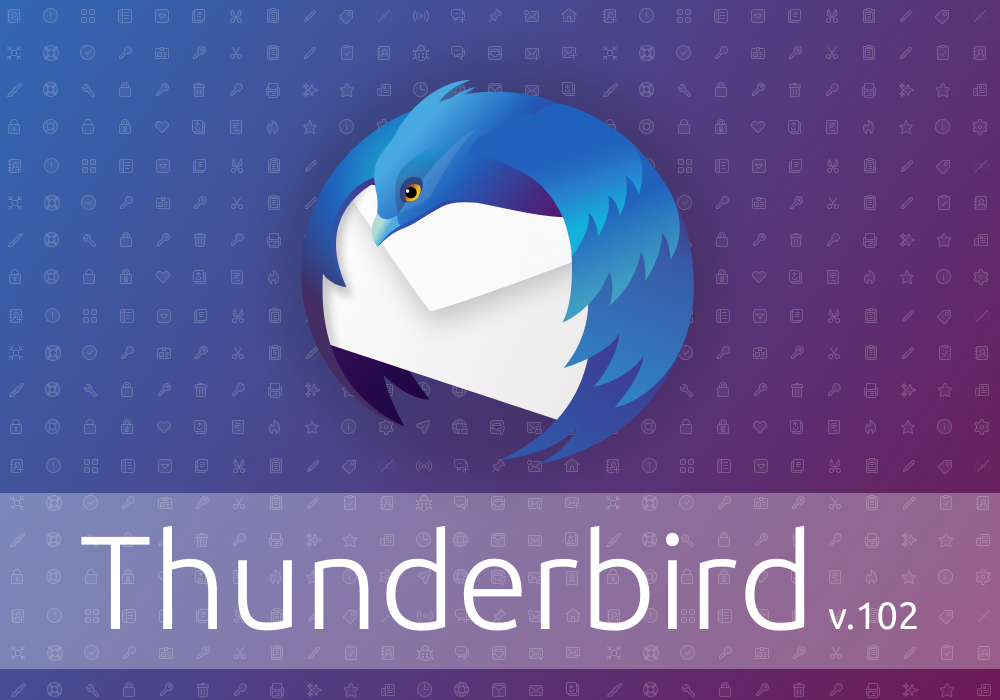 We’re preparing to ship a 2nd build of Thunderbird 102.7.1 with an improved patch for the Microsoft 365 oAuth issue reported here. Our anticipated release window is before midnight Pacific Time, January 31.

Some users still experienced issues with the solution to the authentication issue that was included in Thunderbird 102.7.1. A revised solution has been proposed and is expected to ship soon. We apologize for the inconvenience this has caused, and the disruption to your workflow. You can track this issue via Bug #1810760.

Thunderbird 102.7.0 was scheduled to be released on Wednesday, January 18, but we decided to hold the release because of an issue detected which affects authentication of Microsoft 365 Business accounts.

A solution to the authentication issue will ship with version 102.7.1, releasing during the week of January 23. Version 102.7.0 is now available for manual download only, to allow unaffected users to choose to update and benefit from the fixes it delivers.

Please note that automatic updates are currently disabled, and users of Microsoft 365 Business are cautioned to not update.

*Users who update and encounter difficulty can simply reinstall 102.6.1. Thunderbird should automatically detect your existing profile. However, you can launch the Profile Manager if needed by following these instructions.

On Wednesday, January 18, Thunderbird 102.7.0 will be released with a crucial change to how we handle OAuth2 authorization with Microsoft accounts. This may involve some extra work for users currently using Microsoft-hosted accounts through their employer or educational institution.

In order to meet Microsoft’s requirements for publisher verification, it was necessary for us to switch to a new Azure application and application ID. However, some of these accounts are configured to require administrators to approve any applications accessing email.

If you encounter a screen saying “Need admin approval” during the login process, please contact your IT administrators to approve the client ID 9e5f94bc-e8a4-4e73-b8be-63364c29d753 for Mozilla Thunderbird (it previously appeared to non-admins as “Mzla Technologies Corporation”).

We request the following permissions:

We think we did everything correct, but still get a local authentication error (remote tells us success)

This could be related to a separate issue involving IPv6 connectivity. Please see this post: https://support.mozilla.org/en-US/questions/1400764

What I’ve observed, there’s a difference in the OAuth2 authentication window.

Not sure it’s important though.

I’m having a similar issue. I get an 400 Bad Request for the oAuth-Token:
https://login.microsoftonline.com/common/oauth2/v2.0/token

I receive the following error code from MS:
https://login.microsoftonline.com/error?code=9002326

I too have authentication errors after upgrade to Thunderbird 102.7.0 this morning (Ubuntu 22.04).

Is there any release schedule for the patch?

disabling IPv6 is not an acceptable solution !

Same problem for me since the upgrade to 102.7.0 on Ubuntu 22.04 yesterday. I get an authentification error when relogging to check emails and get the “The authentification server returned: {}” when trying to synchronize calendar and tasks with TbSync.

Will the patch allow connection without having to ask action from the Outlook server admin ?

I got the prompt for the grant by the admin. Admin granted the application, now i get the Authentication Failure.

How long do you think it will take to address/fix the problem?

We already have a working internal build with the fix, so the hope is today or tomorrow latest. In the meantime, you can safely install and launch a previous version (102.6). Your existing profile should be detected automatically. If it’s not, you can launch the Profile Manager by following these instructions: https://support.mozilla.org/en-US/kb/profile-manager-create-and-remove-thunderbird-profiles#w_starting-the-profile-manager

Some instructions on how to downgrade to 102.6 would be helpful. Am using Ubuntu 22.04.

Hey Trevor, if your client was already upgraded to 102.7.0 and you wish to use a previous version for the time being, please simply install and launch an older version for now, (as an example, 102.6). Thunderbird should automatically detect your existing profile. However, you can launch the Profile Manager if needed by following these instructions. A patch should be coming within the next 24 hours.

To check which version you can rollback to, check the output of:
apt-cache policy thunderbird

There you can find a list of available versions from your repo.
Hope this helps.

The error I get is a loop. After updating to 102.7 – I was prompted for my credentials. I put them in and then I was asked again. No error message. I created a new profile – and tried to replicate the problem – the error then became ‘wrong configuration’. I hope this helpful. Downgrading to 102.6 solved the problem.

I am sure a patch will come through right quick. Thanks everyone at Thunderbird – you are doing a great job.

Thank you, that saved my day (or rather week)! Worked perfectly

Same as Ian, I got the page to accept the new application and the requested access, but now it’s asking me my password in a loop. No apparent error when entering it, the window just disappears but it comes back everytime the bird tries to fetch new messages.

Waiting for patch update! Thanks guys for your hard work.

Hi I know it is completely unrelated but may I know when the so called “Supernova” release will be unveiled.
I would like to know the exact date so that I could hop on when it is on stable.
I don’t want to get to know and learn this old classic stuff and then transition to a modern look again.
Or at east could you please say a date before which it will be available. Thanks.

Also a friendly suggestion from me. Please change the logo of this project and also the apps to match the new firefox(browser) like logo. This one looks way too old and classic rather than modern.
Again Thanks!
#loveTBFamily

Hey Hela! Our current target release date for the stable, ESR version of Supernova (115) is the first week of July.

Hello,
do you know, when the 102.7.1 will be released?
My thunderbird updated overnight, i dont have admin rights on this PC, so i cant downgrade.
Thanks,
Tomas

Hi Tomas, 102.7.1 is going through internal testing as I type this, and we aim to release it within the next 18 hours.

But still auth errors with outlook.office365.com

We’re actively investigating this, and the issue is unexpected as the fix worked in our internal build. For now, please use 102.6.1: http://ftp.mozilla.org/pub/thunderbird/releases/102.6.1/

Hi Bob. Assuming you are on Ubuntu and using Snap? Unfortunately, for reasons we’re actively investigating, the patch we implemented is broken, despite working in internal builds.

after going here: https://ftp.mozilla.org/pub/thunderbird/releases/102.6.1/
-which file do I download for WINDOWS 11

For an English version with 64-bit Windows, choose the .exe installer here: https://ftp.mozilla.org/pub/thunderbird/releases/102.6.1/win64/en-US/

Hi, same issues here on a mac. Downgrading to 102.6.1 worked fine. However, every day, my Thunderbird client automatically gets updated to 102.7 despite having the setting to “Check for updates, but let me choose whether to install them”… as opposed to “Automatically install updates”.. quite frustrating to see this happen happen almost every day. Is there anywhere else I can turn off these automatic updates? (until a patch comes out for 102.7)
thanks
mc

Hello and thanks for leaving a comment about this. I want to reassure you that those updates are not coming from us directly, as we have disabled auto-updating until it’s resolved. Can I assume this is a work machine? How was Thunderbird originally installed? Thanks for being patient with us.

I can’t get it to update to version 102.7.1 and it keeps throwing an authentication error. Where can I download the Spanish version? Thanks.

We’ve held back the 102.7.1 update. Thanks for being patient. For now, we suggest downgrading to or installing version 102.6.1, where the authentication error isn’t present.

The best course of action would be to install 102.6.1 in a separate directory (not the one the installer defaults to). Then, you can launch the Profile Manager to select your existing profile in use for 102.7.0

I’m in the group with the authentication errors on 102.7.0 – can someone point me to directions for downgrading to 126? The only installer file I seem to still have is from 2020, and the download available on thunderbird.net is for 102.7.0. Thanks!

Thanks for the clarification.

I disabled updates following this
https://stackoverflow.com/questions/64980412/how-to-disable-thunderbird-auto-update
just FYI if anyone else runs into the same issue

it keeps saying the configuration coudnt be verified and I shouyld contact administrator,

This will be fixed by an update right? Or there is something to be done by the administrastor ?

We’re actively working to solve this and it’s priority #1 right now. Sorry for the disruption to your workflow.

Where can I track this bug?

Unfortunately I am on 102.7 with this problem. I can wait for 102.7.1 (although hopefully not too much longer), is there any way I can force 102.7 to show my old imap downloaded emails from exchange, even though I can not connect to the exchange server at this time?

You can separately install (or if possible downgrade) to version 102.6.1. If needed, launch the Profile Manager to select your current profile from version 102.7.

If I downgrade to 102.4.2 from the jammy-security repo, that works again.

I can only assume the 202.77.1 ‘fix’ hasn’t worked with all O365 tenants. I have a Gmail configured in the same Thunderbird – that’s OAuth2ing fine.

Correct. The fix is causing connectivity issues with some users, which is why we pulled the 102.7.1 update as soon as we could. Expecting a permanent resolution early this week. Thank you for your patience, Matthew.

Sadly, this is the kind of thing that causes my employer to rethink letting me use Thunderbird while the entire office is using Outlook. Fingers crossed for a solution soon. Good luck to everyone working on this.

Thank you for your work, version 110.0b3-1 from snap works
snap refresh thunderbird –beta