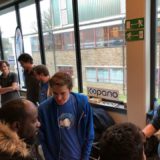 Hello everyone! I’m writing this following a visit to Brussels this past weekend to the Free and Open Source Software conference called FOSDEM. As far as I know it is one of the largest, if not the largest FOSS conference in Europe. It proved to be a great opportunity to discuss Thunderbird with a wide range of contributors, users, and interested developers – and the feedback I received at the event was fantastic (and helpful)!

First, some background, the Thunderbird team was stationed in the Mozilla booth, on the second floor of building K. We were next to the Apache Software Foundation and the Kopano Collaborative software booths (the Kopano folks gave us candy with “Mozilla” printed on it – very cool). We had hundreds of people stop by the booth and I got to ask a bunch of them about what they thought of Thunderbird. Below are some insights I gained from talking to the FOSDEM attendees.

1. I thought the project was dead. What’s the plan for the future of Thunderbird?

This was the number one thing I heard repeatedly throughout the conference. This is not surprising as, while the project has remained active following its split from Mozilla corp, it has not been seen to push the boundaries or made a lot of noise about its own initiatives. We, as the Thunderbird community, should be planning on the future and what that looks like – once we have a concrete roadmap, we should share that with the world to solicit interest and enthusiasm.

For fear of this question being misunderstood, this was never asked with malevolent intent or in a dismissive way (as far as I could tell). Most of the people who commented on the project being dead were generally interested in using Thunderbird (or were still), but didn’t realize anyone was actively doing development. I got many stories where people shared their relief saying “I was planning on having to move to something else for a mail client, but now that I’ve seen the project making plans, I’m going to stay with it.”

Currently, we have a lot to talk about regarding the future of Thunderbird. We have made new hires (yours truly included), we are hiring a developer to work on various parts of the project, and we are working with organizations like Monterail in order to get feedback on the interface. With the upcoming Thunderbird Council elections, the Community will get an opportunity to shape the leadership of the project as well.

The second most prevalent thing expressed to me at FOSDEM was the desire for a Thunderbird mobile app. When I asked what that might look like the answers were uniformly along the lines of: “There is not a really good, open source, Email client on mobile. Thunderbird seems like a great project with the expertise to solve that.”

Heard this a few times and was surprised out how adamant the people asking were. They pointed out that they were Thunderbird users, but weren’t really into mailing lists. I had it iterated to me a handful of times that Discourse allows you to respond via Email or the website. As a result I have begun working on setting something up.

The biggest barrier I see to making a forum a core part of the community effort is getting buy-in from MOST of the contributors to the project currently. So, over the next week I’m going to try and get an idea of who is interested in participating and who is opposed.

This was a frequent request asked for in two forms, repeatedly. First, “How can I encrypt my Thunderbird Email?” and second, “Can you make encryption a default feature?” – the frequency with which this was asked indicates that this is important to this segment of our users (open source, technical).

To those who are curious as to how to encrypt your mail currently – the answer is you may use the Enigmail extension. In the future, we may be able to make this easier by having it built-in to Thunderbird and making it possible to enable in the settings. But that is a discussion that the community and developers need to explore further.

In closing, I heard a great many things beyond those four key points above – but many were thoughts on specific bugs people experienced (you can file bugs here), or just comments on how people used mostly webmail these days. On that second point, I heard that so frequently that I began to wonder what more we could offer as a project that would provide added value to users over what things like GMail, Inbox, and Outlook365 were offering.

All-around FOSDEM was a great event, met great people, heard amazing talks, and got to spread the good word of Thunderbird. Would love to hear the community’s ideas on what they think of what I heard, that means you, so please leave a comment below.

Community Manager for the Thunderbird project.